SEGi College Kuala Lumpur recently held its first live convocation after over two years of subdued feelings imposed by the COVID-19 restrictions. This welcome release was jubilantly celebrated by one and all, and voiced in the poignant valedictory speech by Khoo Tuan Guan, who has just earned his BA (Hons) Business Management with First-Class Honours.

With great humility and palpable fervour and gratitude, Tuan Guan spoke to his audience made up of students, parents, lecturers and all the auxiliary SEGi staff despite his fear of public speaking. He went on about how his doubts about his own abilities nevertheless ended with him eventually joining SEGi. “My results were very bad and my family was facing financial challenges. But my dad insisted that I get a degree and asked me not to worry about the financial part and just focus on my studies.’ There began Tuan Guan’s transformation from mediocrity to first-class honours and the honour of being Valedictorian.

Animatedly, he talked about his fears of not being able to graduate, a fear which was appeased by his learning that a first-class-honours student’s loan through PTPTN would be instantly converted into a scholarship! He thanked his parents for their faith in him, especially through their financial sacrifice, which has since been proven to have not been any sacrifice at all but a wonderful reward.

He added, “I couldn’t have made it this far without the help of my lecturers from the Faculty of Business.” To conclude his speech, he said, “All of us should learn to fight our fears and pursue our dreams and passions. We should never allow fear to hold us back, even when success seems impossible.” 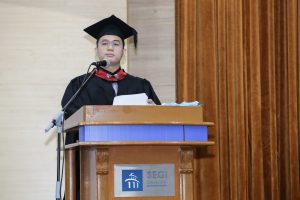 SEGi proudly congratulates Tuan Guan and his fellow graduates for finishing this chapter in their lives, and wish them even greater success in their new beginnings.